Skip to content
We are supported by readers, when you click & purchase through links on our site we earn affiliate commission.

Getting an SD card for Mavic Pro means a lot of things. First and most importantly, you can get the best quality content without being afraid of file corruption or physical damages. Second, comes the convenience of faster speeds and smooth workflow. This article has compiled a list of the memory cards you can use with your DJI Mavic Pro drone.

DJI Mavic Pro packs an amazing set of features for flight control and the ability to capture crystal clear footage. Thanks to the 3-axis gimbal built into it, you can even record 4K videos at 30fps. But, with great quality footage comes the need for a heavy-sized memory card.

You should know a few things before picking the right memory card for the DJI Mavic Pro drone. So let’s have a look:

Along with these, you should also look at factors like warranty and the potential options for data recovery in a worst-case event.

As you start using drones, you’ll soon realize how important it is to invest in extra memory cards. And for that matter, I shortlisted the top 7 Mavic Pro compatible SD cards and reviewed them here for you to choose from:

Unlike the other memory cards on this list, Lexar 64GB SDXC UHS-II Card is a sustainable and professional choice for your DJI Mavic Pro.

The first that distinguishes this 64GB SD card from others is the increased speed itself. The company claims a maximum read speed of 300MB/s, meaning that you will not have any delay while copying content.

As you may have noticed, this isn’t a micro-SD card but a full-sized SDXC card. So you don’t have to carry the adapter wherever you go. In addition, Lexar has included an SD card reader in the package.

It’s suggested to be used if you are looking for the best transfer speeds between your computer and the card itself. It should also be noted that the card has specifically been tested for tough conditions.

If you are willing to spend some money, the Lexar 64GB is an amazing storage option for the DJI Mavic memory card. Not only are you getting a viable package, but the transfer speeds are up to the mark.

Note: This is also one of the best memory cards for Nikon D3300 and other professional-grade devices. Last but not least, the card is built quite tough as well.

The SanDisk Extreme 64GB with Adaptor & Card Reader is the best memory card for recording and storing 4K videos. It’s been designed to provide a better performance, speed, and smooth recording of Ultra HD video, which would perfectly suit your purpose.

The card offers a rather standard read-speed of 160 MB/s and a write speed of 60MB/s. It means you can move the recorded files very quickly.

It should be noted that the SD card is bundled with a micro SD card reader from MobileMate. This USB 3.0 card reader adds extra convenience when it comes to file transfer. Because it’s a U3 A2 class SD card, you can expect easier handling of content from Mavic Pro.

Just so you know, the micro SD card comes with an adaptor that lets you use the card on Mavic Pro among other devices.

The good thing about the bundle is that you would have enough storage to capture 4K video without changing cards frequently. Also, given that you will have a big enough file, good transfer speeds would be beneficial. The SD card also meets the basic requirements when it comes to SD Classes. And, you cannot minimize the helpfulness of the card reader you are getting.

Another product from the Extreme line-up of SanDisk, 64GB microSDXC UHS-I is a standalone micro SD card. You should consider this if you don’t want to spend much on an SD card. However, when you save a few dollars, you will be losing the included card reader, and read speeds are also low. But, if you are not worried about speed, you can give this a try.

This memory card has a UHS Speed Class of U3, which is fast but not as fast as the previous pick. The Read speeds have been brought down to up to 90MB/s although it offers the same writing speeds of up to 60MB/s. It should be noted that the card has been optimized for Android tablets and GoPro cameras, but you won’t have any problem in using it with Mavic Pro.

Once again, because it’s a micro SD card, you will be getting the adaptor with the package. There are also some SanDisk-exclusive features like the included data recovery program and lifetime warranty.

In spite of its lower price tag, the device seems to offer great reliability among other things. At the end of the day, it’s the best micro sd card for Mavic pro that gets the job done.

The PNY 64GB PRO Elite microSDXC Card is an amazing choice if you don’t want to spend too much on a micro SD card. But, of course, this comes with the added convenience of being used in other devices like smartphones and tablet PCs. Also, despite the lower price tag, you get 64GB of storage, which is great.

As mentioned, the card offers a standard set of speeds when it comes to data transfer. It has a read speed of 95MB/s and write speed of 90MB/s. It is powered by U3 standard, meaning stable speeds regardless of the device you are using. When it comes to Mavic Pro, it means smooth handling of footage and a sufficient amount of storage space.

Some reviews particularly mention that the PNY U3 PRO Elite microSDXC Card improves running speeds on devices like Nintendo Switch. That having said, you can expect standard speeds in Mavic Pro as well.

It should be noted that the card is UHS I and not UHS-II. Considering the fact that you are paying way less than you’d pay for the products from Lexar, the standard seems reasonable enough. 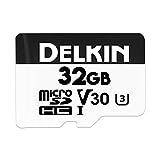 The Delkin Devices 32GB microSDHC UHS-I Card is probably one of the most affordable memory cards you can purchase for Mavic Pro. While it’s true that the storage is capped at 32GB, you can use the card for recording video at Full HD and 4K resolution through the Mavic Pro. This U3 memory card has been optimized for other forms of shoots as well.

Once again, you are getting a microSD card and you will have to use the included adaptor before you insert it into the Mavic Pro. When inserted, however, the card can offer you read speed of up to 100MB/s and write speeds of up to 75MB/s. Compared to the lower price tag the device comes with, the speeds are great for most purposes.

It should be noted that the speeds offered by this card are way too high when compared to the price you’re paying. This card would be an option if you want to have multiple SD cards that you can swap and use in the DJI Mavic Pro. Along with reliable speeds and build quality, you are getting one of the best customer support lines as well.

If you are willing to spend some money, SanDisk Extreme PLUS 32GB is indeed a good memory card for Mavic Pro. SanDisk has managed to provide an SD card that combines universal compatibility — without actually compromising speeds. As we mentioned earlier, you should consider buying two SD cards if you need that extra convenience.

Read speeds and write speeds are pretty standard for the card. One thing I noted is that the card is being used for some mid-range DSLR cameras as well. This is one of the common choices for those who also have Canon Rebel T6i. The read speeds go up to 95MB/s, while the write speeds can go as high as 90MB/s.

There are some added advantages since the product is from SanDisk. For instance, according to the company, you can use the SanDisk Extreme PLUS 32GB microSDXC card for storing up to 80 minutes of 4K Ultra HD video from action cameras like Mavic Pro. The same storage can be beneficial when it comes to HD photos as well. 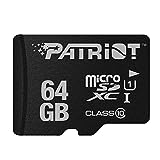 Not really the fastest SD card in the list, Patriot LX Series 64GB MicroSDXC is the cheapest memory card you can get for the Mavic Pro drone.

On the bright side, you are saving a lot of money. If you have been saving up to buy a Mavic Pro and don’t want to spend more on an SD card, this would definitely be an amazing pick.

Of course, there are some compromises that you make. Despite the fact that you are getting a 64GB SD card, to begin with, the read speeds and write speeds are very low. The company promises speeds around just 10 MB/s for both reading and writing. They are not much but would keep your drone running and recording 4K video.

Notwithstanding, the product manages to offer the right level of reliability. The Patriot LX Series 64GB High-Speed Micro SDXC will be able to withstand physical conditions and long-term use without much trouble as well. At the end of the day, though, you are getting a 64GB card that costs less than a fraction of what you’ve paid for the Mavic Pro.

What is the best micro SD card for Mavic Pro?

This depends on various factors, such as the amount of storage you require and other features like maximum transfer speeds. However, if I were asked to choose only one best option, I would go with Lexar Professional 2000x 64GB SDXC UHS-II Card.

Officially, the Mavic Pro does not support memory cards of 128GB capacity. However, some users have successfully used these cards.

Where does the SD card go in a Mavic Pro?

Like the previous version, you can access the SD card storage area from one side. You can easily push the card inside to get it working.

At the end of the day, it makes sense to increase your budget and go for a long-lasting product instead of choosing affordable but ineffective something in the long run. That said, if you pawned off everything to get that Mavic Pro, you could look at some affordable options as well.

I hope this article helped you find the perfect DJI Mavic Pro memory card that you needed. However, if you’re still confused, let me help you make a better buying decision:

Brian Munoz
If you want to pick the best point-to-shoot and action cameras, you simply cannot look beyond Brian. As a trained wildlife photographer, Brian is pretty handy with every camera there is. But then, after placing his bets on literally every available shooter in the retail space, Brian prefers keeping his loyalties restricted to point-and-shoot and action cameras, specifically for helping the more budget-minded buyers make informed decisions.